On the actual scientifically proven health benefits of Kombucha 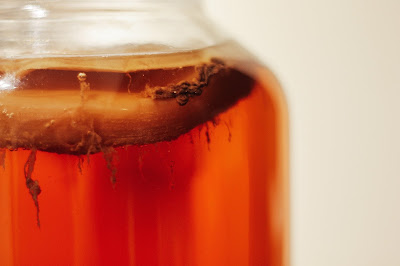 I have been given Kombucha by a recent acquaintance and this mate of mine spared no time in positive adjectives about this Thing! This is the most accurate name I can attribute it since my wife tells me that it resembles her the Alien, by H. R. Giger. I had no idea what Kombucha was but at the same time I was no ignorant as to the potentials of many different probiotic elements out there in the food markets of our cities. Nevertheless, I must assume my ignorance, from Kefyr to a few other names I can't really recall having heard of Kombucha before in my life.

I had to ask him for a few pointers and then browse the web to get to know what exactly was all this Kombucha thing about. As it is usually my approach, when the information available for free on the web is of good quality (with proper scientific backing in terms of research papers and identifiable sources), I waste no time in producing posts about it. I realised that most of the information out there concerning Kombucha, especially that relating or scrutinising the health benefits for humans, is abundant in quantity but not so much in identifiable scientific references.

My idea was immediately to produce a series of easy responded-to questions with adequate sources that could complement the necessary information to one of the most ambiguous present ideas concerning Kombucha. It seems that there is immense unclear information based on broad assumptions as to the actual health benefits of Kombucha for us. 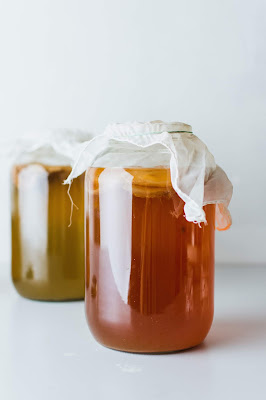 Kombucha* is a traditional fermented tea drink (of pH ~2.5) supposedly originating from ancient East Asia (northeast China - Manchuria), and more recently Germany and Russia [1], that is obtained from the fermentation process of a SCOBY (Symbiotic Culture Of Bacteria and Yeast) in sweetened tea, and that after undergoing a flavoring process for a user-determined period of time (that typically goes by adding sliced fruits to the liquid and permitting a certain marination period), is served cold as a nutritious beverage believed to hold important health benefits for its consumers. Due to its content in different organic acids and the fermentation process that uses sucrose, the drink gains a bittersweet taste that ranges in acidity and fizziness according to the time the acetic acid bacteria and yeasts are allowed to metabolise and grow.

If you are willing to access comprehensive information on the microbiology, composition, fermentation process, toxicity and beneficial effects of this symbiotic partnership, please read the article by Jayabalan et al., 2014 [2].

What are the actual scientifically proven health benefits of Kombucha?

The information available on the web is enormous in size, but also in anecdotal data. In this regard I tried as much as possible to distant myself from any speculative assumptions and focused entirely in direct, yet proven and referenced, scientifically-supported data. Most of these conclusions were obtained from research studies conducted in rodents and cell lines rather than immediately in human subjects. And to be fair, most of these results are only observed after a certain trial period without follow-up.

It is important to look into the original studies to understand the exact ins and outs of the mentioned observations, and also to accept that much needed human studies are not readily available (to the best of my knowledge). The lack of studies in humans must be taken into account. Regarding the listed benefits, please check [2, 4] for references:

A different article by Sreeramuu et al (2001) [3] analysed the antimicrobial activity of metabolites after a 14-day Kombucha fermentation period to attest of its inhibiting activity against pathogenic bacteria such as Shigella sonnei, Escherichia coli, Salmonellaenteritidis and Salmonella typhimurium, all bacteria that can cause diarrohea, stomach cramps, fever states and some other clinical manifestations due to associated infection progression.

In terms of harmful health effects the reports relate immediately to high consumption and consumption by susceptible individuals with underlying conditions [4]. The observations relate to internal lesions, perforation of the gastrointestinal tract due to acidosis and gastroenteritis (however this is easily avoided when the fermented drink is prepared under sterile conditions - VERY IMPORTANT - and left to ferment from 7 to 10 days, in that sense  the majority of spoilage pathogenic organisms will not develop as they cannot grow below a pH of 4.0 [5].

With all these in mind and considering that all my fermented brews based in Kombucha tea are performed in highly sanitary conditions, I will keep enjoying this very refreshing drink without worrying too much if its probiotic and nutritious effect is an immediate advantage. Nevertheless, animal data and studies on cell lines point towards benefits, although its also noted that it is important to limit consumption so to avoid side effects; as it is important to also limit the fermentation times so to avoid a putative production of alcohol alongside.

* In terms of denomination, Kombucha is simply the Germanised form of its original Japanese name Mo-Gu.

Email ThisBlogThis!Share to TwitterShare to FacebookShare to Pinterest
Labels: I have a question