Intelligence is an evolutionary aberration 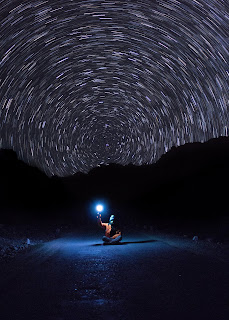 The first thing people should have on their minds is that thinking is a form of meditation, of organising perceptions that are in need of alignment. And these perceptions need aligning in order to gain coherence, order, be adequately located, because in the universe everything goes from chaos to order if one wishes to thus so interpret the universe. In reality there is no chaos or order, only the 'is'. And this being hasn't got a reference entropy, we are the observers within our smallness or in our magnification, and we end up  convincing ourselves that the reality at our eyes' reach needs order.

What in reality needs order is our interpretation of objects that we perceive so that when we are stricken by this enormous quantity of stimuli an idea can be formed, contextualised of comprehensible concepts, of truths, even though these are limited beforehand by our own emotional education, intellect and physics. It is the gift of seeing things, regardless of the eyes used in observing, that generates meditation. To meditate then becomes a fitting process more than a search for truth in the beyond. To mediate is a sincere form of admitting our difficulty to absorb the numerous elements that surround and affect us.

And everything affects us, even the small things we do not consider to be relevant. Within its littleness they reveal themselves, and touch us, they leave an intellectual and emotional trace with a practical meaning. The practical meaning of all is the 'being'. To be. By being, one fulfills the role of all that exists. By being, one fulfills the organic and inorganic form, the physical and ethereal form of all things. And all tends to exist and permute between two states, the supposedly invisible one and the apparently visible one; but even to be one of these states or to permute, there is need for a primary predisposition that does not come from egos or ideas. One exists just because. To exist is the unique state of all things, physical or non-physical, mental or tactile, old, modern, contemporary. The only structure of things that one sees, thinks, feels or do not feel, but idealises (even if it is in the ridicule of one's denial), and exists. The Universe exists, within and beyond itself and among itself, sit all explanations that are not explanations by nature. They emerge as explanations because we, thinking forms questioning the existence and wandering around the idiosyncratic values of existing, create questions for things that are not interrogations ... until someone sees in them the need for an explanation. To meditate is thus the organisation of order within the thinking and questioning 'organism' that wants to answer questions that do not exist, but that one decided to ask. The questions are then a tool of the thinking being, so to give an instrumental direction to this conflict, so to understand why it exists ... on the purpose of existing, on the logic of all that surrounds us and on the reason why have we, questioners, consciousness of our own existence and in a consequent manner, the need of expressing to ourselves of the many theories fabricated to explain our incomprehension. Above all what is to be extracted is that one exists. That is the acquired detail, the answer, the question, the statement, the exclamation, the starting point of all; no Big Bang or anything prior to it or prior to the creative/creation act. One exists. The way one exists is the real question. The imposing question is not and shall not be why one exists. Existing is the only shape of things, even of those we do not know yet and that for that matter we cannot shape (not even in thoughts). The question is uniquely and exclusively - Why do I exist in this shape?

Why do I exist in this shape?

Before any physical-chemical, astrophysical, biological, biochemical and all other current scholastic derivations it is necessary to distinguish two determinant factors in the comprehension of the ALL and EVERYTHING:

1) Harmony in chaos is an existential language, and 2) Ego is natural, it is but a quality inherent to all, the identity card of all organic and inorganic forms, and it only gains anti-equilibrium idealisation when the mutation of the 'being just because' happens, for the 'aberration' called intelligence. It is in the intelligence that the object that exists uses ego and sees it as unique or needed for the comprehension of the cosmos (the cosmos being the infinite ALL and EVERYTHING). Considering that the ego is natural, a structure of attraction between forms, an energy so valid like the different electromagnetic forces exerted between electrons and atoms, and all the individualised and aggregated particles that conjecture through many wanderings; ego is the connection of being with its own state, the acceptance of its own role in the cosmos. Ego is purely and simply the accepting of all individualised things, that the natural state of things is to exist. But for ego an enormous 'problem' is reserved, the mutation of its natural state that within the normal transformations of matter generates different forms of being ... goes through different structural paradigms and acquires rhythm, until it eventually and never obligatorily, becomes intelligent. Intelligence is a mutation of the ego, it is the revelation to the being that among ALL and EVERYTHING  there is the perception that ego IS and needs to subsist, remain, survive. But what need of surviving does a form that already exists, has always existed and will always exist, have? Even though eventually the ego has existed in different forms and different perspectives. Intelligence is the mutation. Intelligence is the derivation that makes ego - the identity card of all individual things -, review itself as an identity  that undoubtedly needs to continue being that form.

MEN before becoming MEN was allegedly a simian. And before that was a microorganism floating around in a primitive soup. And even before that MEN was cosmic particles gravitating in pitch dark. Meaning that, MEN have always been; always existed as an object-form (regardless of the different concentration, aspect and identity taken). It is when such form aggregates and clusters into a human being that walks vertically, thinks, use tools, learns and judges him/herself, that the perceiving of Ego and the pressure exerted on ego admits that its own existence is in danger thus needing to account for its eminent destruction, incessantly looking for its own survival, when in reality what wants to survive is the state of alertness called Intelligence. Intelligence does not want to extinguish because it considers itself under constant threat coming from other things that simply ARE. Simply wants to operate as the controller of everything, as the key to existence of all things. Places itself as the core of the Universe, of all Universes, creates God(s) to explain what cannot be recalled because until it wakes up to its own perception it just was, ..., but under different formats; ..., creates a perception and substantiates it using selfishness as a justification shield of the need to always remain this self-conscious form. Intelligence is not the X-Factor, but the mutation inside the simple process; linear, multifaceted, of the existential chaos. That is the natural state of things. This has always existed, things will always exist, things will always have their own individualised identities (ego) and occasionally, some (yet rare) objects will 'meet' the mutation that will take them to becoming intelligent. Intelligent will acute the need for survival, chaos will increase, the energy will revolt for then to extinguish the intelligence-object and all go back to normal. Meaning that, in the process of becoming a survivalist, the intelligent being will not approach its own consciousness with humility but in a more negative, egoistic and greedy fashion. The only 'good' thing that is with the state of being human is the joy that is self-attributed in the orgasm. All the rest is a constant fight to acquire the power that guarantees exactly that joy. The more we try to be humans the more we act as animals for the 'selfish gene' is active (read 'The Selfish Gene' by Richard Dawkins). The Male being spends anecdotally 90% of thinking time considering sex for pleasure, not due to pure hedonism but to compensate the addiction to dopamine, the vice. From the moment we are born we live addicted to pleasure as a means to produce dopamine that gradually levels down the need for more pleasure. Reproduction is thus a genetic expression of egoism that once again intends the ego to survive yet more individualised as competitors are closer.

I honestly believe that intelligent life is unnecessary because the need for intelligence forces an over-expression of an ego, 'a priori'. Of an imbalanced existence within the known cosmos. Non-intelligent forms of life, regardless of the negation in the paradox itself, operate in homeostasis. Operate egoistically. Intelligence is therefore something toxic, not as positive as one might consider it. The meaning of it all resides in one thing, in my humble opinion; the thing we call LOVE. PURE LOVE. Only through love an egoistic being can correct the imbalance generated by over-expression of ego. Hence, people that do in fact love genuinely, putting their lives at risk for the Greater Good.  Near death studies show that the answer for all resides in Love. Only Love can correct the imbalance.

In conclusion, my idea is that the perfect definition of existence is when there is no real intelligent life, but solely multidimensional consciousness and/or physical-chemical forms that are only willing to be part of the Whole, of the Everything. Intelligence is a disarray, a diversion in the cosmic picture. We, humans, are but the product of such imbalance that eventually is to be corrected, just like dinosaurs and the like were. Some scientists state that Mars had once intelligent life in a long long long past. And that such Life was eliminated by a huge war, a huge conflict. If that is true, once again the generated imbalance by the surfacing of intelligence was corrected. And so it will be through times. We humans will not be the first and we won't be the last examples.

Post image by Yash Raut on Unsplash
Posted by Pudget at 13:47