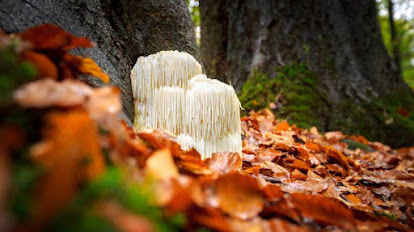 Very recently, an incredible docuseries debuted on Netflix. It covers the highly interesting world of Fungi, their emergence as kings of the ecosystems, debunking the public generalised idea of an apparent vulnerability. We couldn't be 'more wrong'!!!! If there is a resilient species, clever for their societal dynamics, incredibly adapted to making their presence noticed with the sporulation of millions of very light microspores that get carried away by the weakest breeze, FUNGI are the deal. I wouldn't be able to reduce their tenacity and biological cleverness in a small book, let alone a paragraph in a blog post.

Please watch the series 'Fantastic Fungi' (hopefully the link will be available for the years to come for everyone to savor the educational quality of its content).

Fungi are very adaptable and in the game of survival that all species play for their own sake, they went from absurdly evolved underground networks to making other species do exactly what they want; a process as bizarre as the morbid zombie-like approach I have written about in a previous post entitled 'Survival of the Poisonous: "Ophiocordyceps vs. Ant'.

Nevertheless, a particular species of mushrooms that immediately caught my attention was the one known as Lion's Mane (Hericium erinaceus). This mushroom has been identified as having very interesting properties that can help solve, once and for all, the most challenging aspects of the neurological decadence in humans, especially those related to Alzheimer's. In a time where researchers try their very best in gathering the most clinically relevant information concerning this disease, and where predictors of incidence in humans are now starting to emerge from these research projects (like the one from the Lund University [1] that might help tackle the price and diagnosis' limitations that see around 20 to 30% of patients with Alzheimer’s disease ending up wrongly diagnosed even within specialised healthcare [1]. The project lead by Professor Oskar Hansson generated a prototype online algorithm that makes use of the combination of a simplified blood test ('measuring a variant of the tau protein [phosphylated tau] and a risk gene for Alzheimer’s') associated to a short (~10 minutes) triplet of cognitive tests. Alongside the simplicity of the process, especially when considering how challenging these patients can be when facing complex tasks, is the fact that the diagnosis predicts correctly with over 90% certainty exactly which patients would be in risk of developing dementia due to Alzheimer’s disease within a period of four years.

This tool will not only increase the quality of care of patients in a predictive and planning fashion, but also concentrate and focus the targeting of the different developed drugs in more accurate indicators and variables, treatment-wise.

It is here, when it comes to treatment, that some researchers have been interested in the incredible potential that Lion's Mane Mushroom is reporting from the different investigational projects around the globe. For example, some investigators have observed this mushroom to have therapeutic properties that promote recovery of nerve and brain health [2] due to its erinacine production in the mycelia of its organism. The same authors even propose an optimised process for an advantageous fermentation process, so the content in erinacine A (the only erinacine substance that has been confirmed as having pharmacological activity in the central nervous system in rats) is increased [2]. Their rat models have helped identify protective properties in Ischemic Stroke (showing capacity to reduce neuronal apoptosis and stroke cavity size in the studied rat brains), Parkinson's Disease (a disease with a profile of gradual loss of dopaminergic cells in the substantia nigra pars compacta region of the brain, and that ultimately ends up resulting in motor problems such as 'resting tremor, rigidity, bradykinesia, and postural instability') - however, with Lion's Mane erinacine A, the dopaminergic injuries and accumulated oxidative stress in the stratum and substantia nigra were significantly improved. And even with transgenic rat-models of Alzheimer's disease where the occurrence of amyloid-β plaques that participate also in the increasing of secondary brain comorbidities such as 'inflammation, excitotoxicity, and apoptosis', and add on to the negative effects associated to the deposition of hyperphosphorylated tau proteins - in this study the observed transgenic mice treated with H. erinaceus mycelia were able to 'recover behavioral deficits after 81 days of administration'.

The range of protective/recovering activities observed in the brain of different transgenic mice mimicking the different aforementioned neurodegenerative complications, reveal a promising way forward, as some studies have recently established:

Li, I-C. et al 2020 with the 'Prevention of Early Alzheimer’s Disease by Erinacine A-Enriched Hericium erinaceus Mycelia Pilot Double-Blind Placebo-Controlled Study' studied the effects of capsules containing two contrasting concentrations (350 mg/g and 5 mg/g) of erinacine A per day in treating mild Alzheimer's patients and observed that the highest concentration is well-tolerated and beneficial to their neurocognition.

Their cytotoxicity has already been established a long time back as low by other studies, I hereby mention solely two as an example to avoid a longer text [3] [4]; but this study by Li et al (2020) [5] where a 70-fold higher concentration has been used without observed clinical cytotoxicity is ever so promising for the future paths this realm of investigation may take.

[1] Simple Diagnostic Tool Predicts Individual Risk of Alzheimer’s, Neuroscience News, [https://neurosciencenews.com/individulaized-alzhiemers-risk-tool-18484/], last visited on the 3rd of August 2021, last update on the 24th of May 2021